How a container recycling scheme is empowering people living with disability

Josh Turner remembers the first time he was paid after starting work at the Good Sammy container deposit depot.

This article was written by Holly Lane for ABC Radio Perth and the original article can be viewed here otherwise scroll down to continue reading. 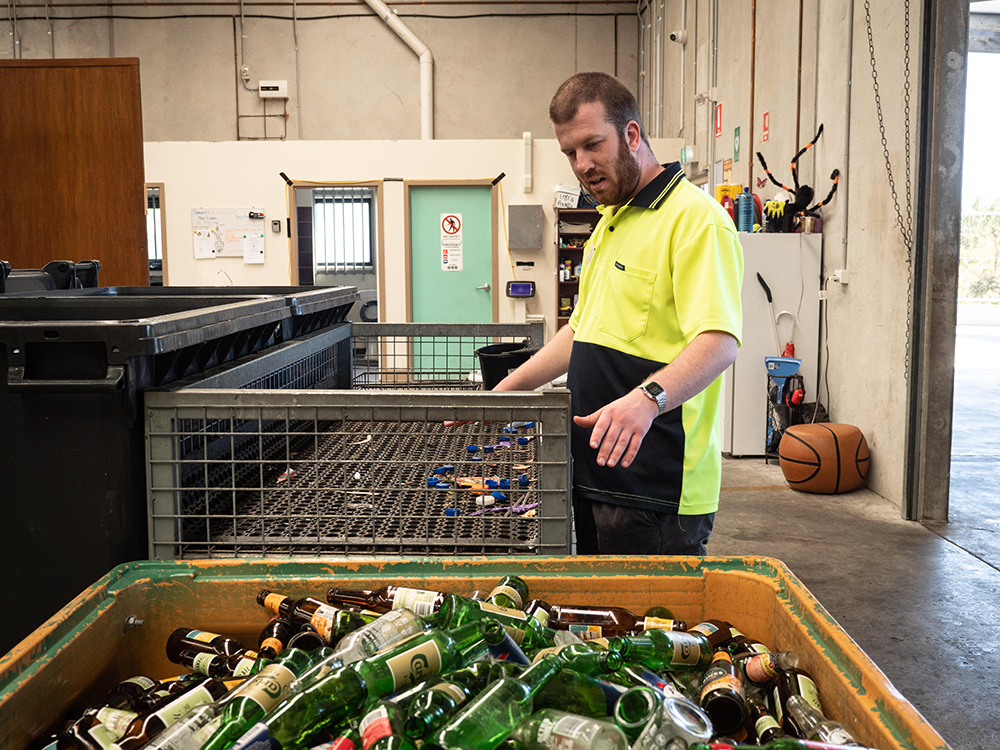 Josh Turner remembers the first time he was paid after starting work at the Good Sammy container deposit depot.

"Honestly, it was awesome. I felt like I'd earned it," he said.

"I felt like I did put in some effort and this is the reward that I got and I was just hyped."

Mr Turner is neurodiverse and previously had only been able to work in volunteering roles.

He said getting his first paid job had made a great difference in his life.

"I'm now actually even more social outside of work. I've even made a little circle of friends at work that I go out and do dinners with," he said.

"And I even have another circle of friends that I play Dungeons and Dragons with, so I'm really branching out now."

Mr Turner said he loved the camaraderie and mutual support of working within a team.

As a natural introvert, he said the job had helped him to develop confidence and improve his social skills by working directly with the public.

"I'm finally going out of my comfort zone," he said.

"I am now able to just talk to people, getting to know how to talk to strangers.

"I'm still developing the skills to just be confident in front of strangers, but I'm getting there."

Deposit scheme is more than recycling

WA introduced a container deposit scheme in October 2020, in which people are paid 10 cents for returning eligible containers to participating collection points.

Tim Cusack, chief executive of WA Return Recycle Renew, a not-for-profit that runs Containers for Change, said the scheme had already redirected about 800 million containers away from landfill.

Across the state, 733 local jobs across 256 sites have been created.

But alongside the environmental benefits of recycling, the container deposit scheme continues to have a wider community impact.

One of the authorised refund points is a drive-through drop-off and processing facility at Wanneroo, in Perth's northern suburbs.

Managed by Good Sammy, the facility offers supported, paid employment for people living with a disability.

The process of dropping off containers takes a few minutes.

A vehicle is directed to park in a designated sorting bay, the containers are sorted and counted, and the money owed is paid into an account linked to a container deposit scheme membership ID or in cash.

Mr Turner's team has processed 11 million containers since the scheme's inception, with nine million of these dropped off directly by community members.

Collected containers are bundled and sold to recyclers through online auctions.

Some materials — such as glass and aluminium — can be recycled repeatedly without degradation while other materials, notably plastics, can be used to create new products such as textiles and industrial components.

According to the latest Australian Bureau of Statistics data, there are more than 400,000 people living with a disability in Western Australia.

Good Sammy CEO Melanie Kiely said it was important for everyone to be able to access employment.

"It's about an opportunity to build skills and develop skills in a safe environment," she said.

Aksheet Raikundalia of Good Sammy said seven new jobs had been created across the business's two drive-through locations in Wanneroo and in Canning Vale in Perth's south.

He hopes that more positions will be created as more people opt to return their containers rather than throw them in the rubbish.

Chris Shuttleworth has been working at the Wanneroo depot since it opened in October 2020. He has a trades background and fulfils a variety of roles, including mentoring and providing support to other team members.

Mr Shuttleworth said he had picked up some new skills himself and was enjoying being able to help people find their feet in the workplace.

"Working alongside, showing them, preparing them to go out into the community and engage in full-time work, it gives me something at the end of the day," he said.

"I feel a lot better if I've helped in a small way, or someone's helped me."

"If there is a person who's already doing a car and the amount is a lot, I just go help them out," he said.

"If you're having a struggle with a count, someone will usually come over and help you."

Ms Kiely said the main goal was not necessarily for supported workers to remain in their role but to provide them with skills and opportunities that would take them into other positions within Good Sammy, or partner organisations and beyond.

Apart from creating jobs, the container deposit scheme has also seen significant funds raised by charities, not-for-profit organisations and community groups who then invest the funds back into the Western Australian community.

Mr Shuttleworth said he had observed one notable change since the container deposit scheme started.

"Where I live is opposite a reserve and it was just a line of beer bottles and tins, and now you don't see that, it's just not there," he said.

"The joke is when [the can] flies out the window someone will catch it before it hits the deck.

"It's really cleaned up the neighbourhood and I'm all for it."

Holly Lane is a freelance reporter. She produced this story for ABC Radio Perth for the International Day of People with Disability. Assistance by James Corker.

How can we help?

Tips for donations - how, where and what!

I'd like to volunteer and join the Good Sammy family.

I have a business, how can we become involved?

I am looking for a job.

Creating meaningful employment opportunities and pathways for people with disability

A proud Agency of the Uniting Church in Australia